Use this calculator to compute the z-score of a normal distribution.

Please provide any one value to convert between z-score and probability. This is the equivalent of referencing a z-table. 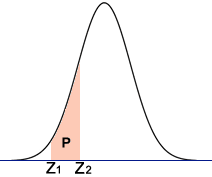 Use this calculator to find the probability (area P in the diagram) between two z-scores.

The z-score can be calculated by subtracting the population mean from the raw score, or data point in question (a test score, height, age, etc.), then dividing the difference by the population standard deviation:

The z-score has numerous applications and can be used to perform a z-test, calculate prediction intervals, process control applications, comparison of scores on different scales, and more.

The values in the table below represent the area between z = 0 and the given z-score.

How to read the z-table

In the table above,

Because there are various z-tables, it is important to pay attention to the given z-table to know what area is being referenced.