This Time Zone Calculator converts between different time zones. To determine time zones for various locations, use this page as a reference.

What is Time Zone

A time zone is a region on Earth that uses a uniform time. They are often based on the boundaries of countries or lines of longitude. Greenwich Mean Time (GMT) is the mean solar time at the Royal Observatory located in Greenwich, London, considered to be located at a longitude of zero degrees. Although GMT and Coordinated Universal Time (UTC) essentially reflect the same time, GMT is a time zone, while UTC is a time standard that is used as a basis for civil time and time zones worldwide. Although GMT used to be a time standard, it is now mainly used as the time zone for certain countries in Africa and Western Europe. UTC, which is based on highly precise atomic clocks and the Earth's rotation, is the new standard of today.

UTC is not dependent on daylight saving time (DST), though some countries switch between time zones during their DST period, such as the United Kingdom using British Summer Time in the summer months.

Most time zones that are on land are offset from UTC. UTC breaks time into days, hours, minutes, and seconds, where days are usually defined in terms of the Gregorian calendar. Generally, time zones are defined as + or - an integer number of hours in relation to UTC; for example, UTC-05:00, UTC+08:00, and so on. UTC offset can range from UTC-12:00 to UTC+14:00. Most commonly, UTC is offset by an hour, but in some cases, the offset can be a half-hour or quarter-hour, such as in the case of UTC+06:30 and UTC+12:45.

Time zones throughout the world vary, and used to vary even more than they currently do. It wasn't until 1929 before most countries adopted hourly time zones. Nepal, the final holdout, did not adopt a standard offset of UTC until 1956, and even then, has a less common offset of UTC+5:45.

Generally, a time change of 1 hour is required with each 15° change of longitude, but this does not necessarily always happen. For example, China and India only use a single time zone even though they are countries that encompass far larger an area than 15° of longitude. Russia on the other hand, is divided into 11 time zones, though at one point this was reduced to 9 time zones. As can be seen, although there is a general standard throughout the world for defining time zones, it is still highly dependent on the country, and is subject to change.

The following map displays the standard time zones across the world. Click the map to enlarge it. 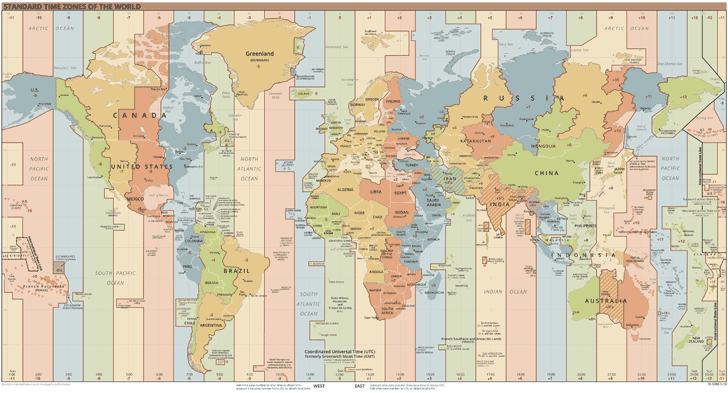 Many countries have more than one time zone. As a general rule of thumb, a change of 15° of longitude should result in a time difference of 1 hour.

In the U.S., there are a total of 9 time zones used. Likely the most well-known include Eastern, Central, Mountain, and Pacific Time Zones. These time zones encompass most of the contiguous United States.

Atlantic, Alaska, Hawaii-Aleutian, Samoa, and Chamorro Time Zones cover the rest of the United States, including Alaska, Hawaii, and the other U.S. territories. 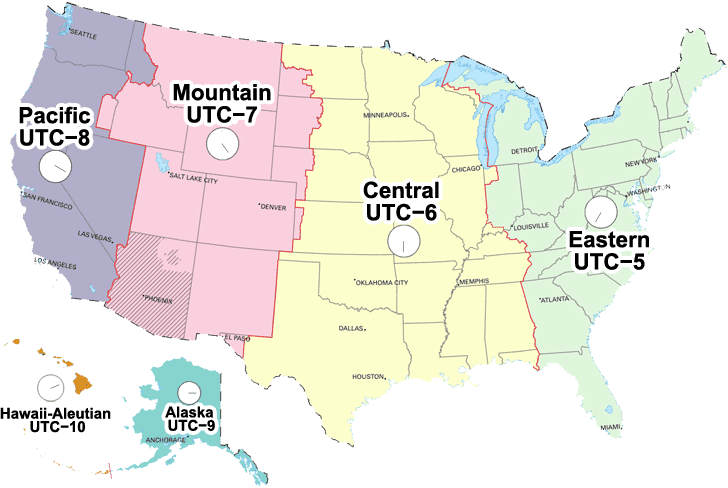 Many countries or regions, especially those in Europe and North America, practice daylight saving time (DST), sometimes referred to as "summer time," with the intent of saving energy. This typically involves advancing the time on a clock by one hour in early spring, and "rolling back" the time in autumn. Manipulating the time as the seasons change can better synchronize working hours with sunrise and sunset times in certain areas. This is less relevant for higher altitude areas (where sunrise and sunset times are significantly offset with regular working hours regardless of time manipulation) as well as locations near the equator (since there is a small variation in daylight throughout the year). 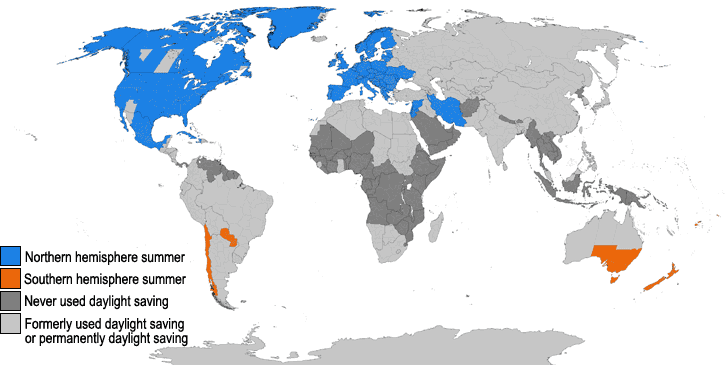 * This Time Zone Calculator does not consider Daylight Saving Time in its calculations.