What is wind chill?

In winter, the temperature felt by the body is typically lower than the actual air temperature. This is similar to the body feeling a higher temperature under high humidity conditions in the summer. Refer to the Heat Index Calculator for further detail.

A surface, such as the skin on a person's body, loses heat through conduction, convection, and radiation. Although conduction and radiation are relevant to heat transfer, wind chill temperature is mostly a result of convection. Convection is defined as heat transfer due to the bulk movement of molecules within fluids such as gases and liquids, such as wind. Essentially, as the air around a body moves, it disrupts the warm air surrounding the body, allowing cooler air to replace the warm air. The faster the wind speed, and thus the movement of the surrounding air, the faster the surface cools. The result of wind chill is to increase the rate at which heat loss occurs. The physiological response of the body to an increased rate of heat loss is the generation of more heat to maintain surface temperature, resulting in the perception of lower temperatures due to greater heat loss.

How to calculate wind chill

The perception of lower temperatures caused by wind led to the development of many different formulas that attempt to qualitatively predict the effect of wind on this perceived temperature. Because wind chill temperature is not an exact science, weather services in different countries use standards relevant to their particular region, and thus its estimates may differ from those provided by local weather services in other regions. This calculator uses the formula developed by the National Weather Service in the United States, which was listed below.

where T is the actual air temperature in Fahrenheit, V is the wind speed in mph. 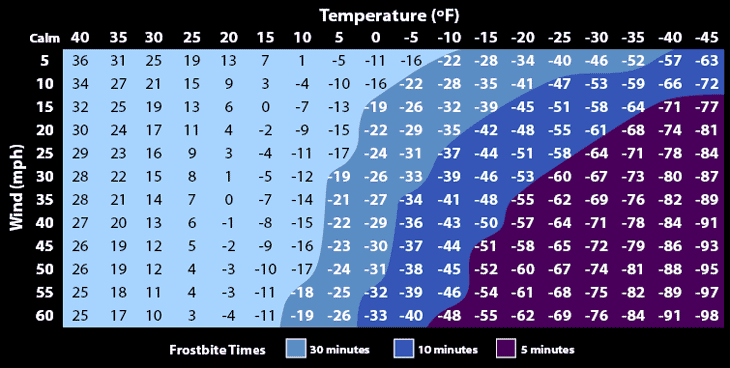 Frostbite can occur when skin or other tissue is exposed to low temperatures. Usually, the first signs of frostbite involve numbness, discoloration of the skin, and feeling cold, typically in the extremities of the body. More serious complications include hypothermia (which will be discussed below) and compartment syndrome, a condition that results in insufficient blood supply to tissue in a particular space.

Frostbite has historically been described in terms of degrees of frostbite, similar to that of burns:

Frostbite can be prevented by taking certain precautions when circumstances put a person in a situation that involves low temperatures. These include:

Hypothermia occurs when the body dissipates more heat than it absorbs, leading to a reduction of body temperature. In humans, hypothermia is defined as a core temperature below 95.0°F (35.0°C). Symptoms can range from mild shivering to cardiac arrest.

Hypothermia most commonly occurs as a result of exposure to extreme cold. It can also occur from other conditions such as alcohol intoxication, low blood sugar, anorexia, and advanced age.

Frostbite and hypothermia can both occur as a result of low temperatures, and can lead to serious permanent, and sometimes life-threatening complications. As such, it is important to dress appropriately and understand the risks associated with exposure to low temperatures for extended periods of time. Below is some general advice on how to stay warm and safe in varying degrees of low temperatures. Below certain temperatures, staying out should be entirely avoided due to serious risks to a person's health.

15 to -15°F (-10 to -25°C): There is a risk of hypothermia if you stay outside for long periods of time without adequate protection. Dress in layers of warm clothing. A thin, wicking layer to remove perspiration from the skin is a good start, followed by a thicker layer of fleece, polyester, or wool that will insulate the body. The outer layer should be wind-resistant, and ideally waterproof depending on the weather. Wear a hat, mittens, and scarf.

-15 to -50°F (-25 to -45°C): There is a risk of frostbite on exposed skin and a risk of hypothermia if you stay outside for long periods of time without adequate protection. Similar to how you would dress in 15 to -15°F, a thin wicking base layer, fleece, wind, and water-resistant outer layer should be worn. Cover all exposed skin, particularly the face and hands. Layers can be added if necessary, such as a synthetic or down jacket for further insulation.

-50 to -75°F (-45 to -60°C): Exposed skin may freeze (frostbite) in minutes, which can cause lasting, potentially permanent damage. There is a serious risk of hypothermia if you stay outside for too long. Dress in layers of very warm clothing, as described in the previous temperature ranges, with more insulating layers, and a wind and water-resistant outer layer. Cover all exposed skin, particularly the face and hands. Limit outdoor activities to short periods of time or, ideally, cancel outdoor activities entirely.